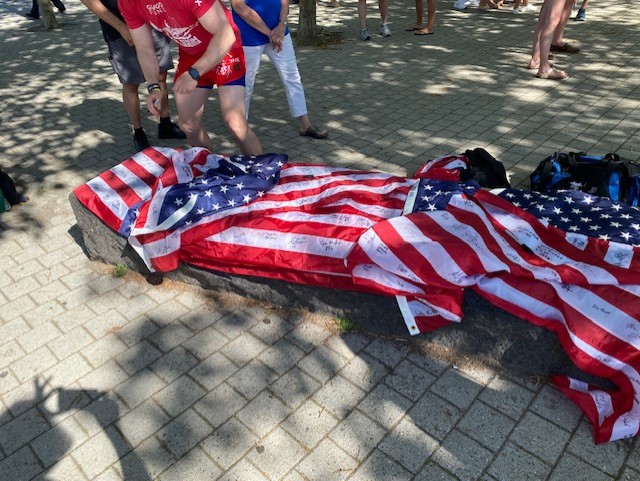 When I swam the 2021 GIGO Navy Seal Swim, I was honored to have the opportunity to  be considered to go back into a place that almost took my life in 2009, to have a coach and team that supported me,  to gain redemption from the Hudson River, to swim with my wingman who has dutifully served the United States in the US Navy and raise money for those veterans that have fallen on hard times.

When Bill Brown invited me to participate in the 2022 GIGO Navy Seal Swim, I was humbled to be with heroes and patriots who hold themselves to the highest standards and sit down and meet them with heroes and hear their stories—humbled to be considered a patriot. I am humbled that SWIMMER magazine did a story about my struggles in re-learning to swim. I  am humbled that ABC News followed and interviewed me about my journey and witnessed what we all had to do to be there on Seal Swim Day. And the Hudson River humbled me from the moment I jumped off the bridge into the river to when I climbed up the ladder in Battery Park NYC to exit the river for the last time.

As I wrote last year, the Hudson River is no joke. This year I had a new swim partner, a rock star swimmer. This year I was determined to do most of the physical activities that led to jumping into the Hudson River off a 12-foot high bridge and after. Last year my wingman, Suzanne, had knee surgery, so we decided not to do the run portion and focused on the swim. This year, I was determined to do as many pushups as possible, run the mile to the bridge, and the mile run AFTER we got out of the river to the 911 memorial.

Before the ceremonies began, I met up with Kelli, my angel, who watched over me the entire weekend.  She was with Kristen Thorne from ABC News, who interviewed me for an upcoming show on ABC and then followed me to the point I jumped off the bridge at Liberty State Park.

If you have ever participated in any athletic event, you understand that emotions run high and everybody is excited to get it going.  Amp that up about 10X as not only do you have the running, pushups, and swimming, but the emotional side of what the day represents is, if not more, emotional.

From moment one in the river, the currents were much more active than last year.  Unless you swim in the river or one like it every day, you cannot train for what to expect. It is humbling.

As I mentioned, my swim partner rocked it without fins, and I am very proud of her.  On the other hand, I kept to my game plan and was slow and steady. From the 2nd half of the first leg to the Statute of Liberty, to about 300 yards from the end, it was four strokes forward, one stroke back.  What kept me going was focusing on the mission at hand.  I knew I had put in the “reps” and had the stamina, but I needed to focus on the “WHY” I was doing this.  I kept thinking about the men and women I had met in the military that put their lives on the line, the veterans who lost limbs and had fallen on hard times, the first responders who saved me, and the other 154 on US Airways 1549 just down the river.  I employed the strategy I teach about managing your state and my primary question.

At each stop, I did 22 pushups for those veterans who lose their life daily, then regrouped, spoke with my swim partner, ate a GU gel, and circled my mind around focused execution.  As I watched the other patriots and seals on the barges, I was humbled to be in their presence.  But on each barge and at the end after we exited, I was humbled that so many participants came up to me and spoke about
January 15, 2009, thanking me for being there and facing the Hudson River again, wanting to get a picture.  It was very humbling.

So compared to the 2021 GIGO Seal Swim, the 2022 GIGO Seal Swim was tougher but came out with more gratitude.  And that is the biggest lesson.  I found the pathway to turning whatever turmoil you may have begins with loving yourself, humbling yourself, holding yourself to a higher standard, and having “wingmen” that will be there with you to guide you in.

Accept that life will throw you heavy currents, but if you give love and accept love from others, you will always triumph.

“ Doing the hard things is what brings us together, and doing it to honor those who made the ultimate sacrifice and went before us is what it’s all about.”

On August 6th, I went back into the Hudson River to swim with the US Navy SEALS to raise money for the GI Go Fund. These funds go to support those military veterans who have fallen on hard
times. Thank you for helping me in this philanthropic endeavor!