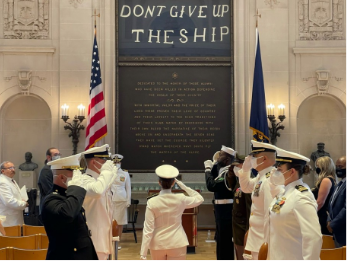 Last week, I was honored to be with my wingman, Suzanne, at her retirement ceremony at the US Naval Academy in Annapolis, MD. Suzanne is one of the most organized and prepared people I have ever been around. She had her day planned and had her classmate, Heidi, be her public relations officer for the day. Heidi’s role was to answer any questions for her attendees and make sure I was taken care of for the day.

Before I went to meet Heidi to attend the ceremony, I did some interviews for the 13th anniversary of the Miracle on the Hudson. During one of the interviews, I was asked why I thought the day ended up like it did, as it could have gone drastically different. I told her that one of the key reasons why situations like the one I was involved in are successful, is because they have belief in the most uncertain times. There is no more uncertain time as when you are going down in a plane crash, like US Airways 1549. I believe that mindset, the ability to believe in your outcome even in a crisis, helped everyone on the plane that day. It not only helped me to be able to understand and make the decisions that I made on the plane, but it also helped me maintain and control my mindset and the people I was around.

I was blessed to be upgraded to first-class on the flight home. It was a long but rewarding and fulfilling day. I turned on my Ipad to watch the final episode of “Ted Lasso,” and the flight attendant Monica came up to ask me for my drink order. She was very personable and asked me why I was in Baltimore. I told her why and we quickly struck up a conversation about the upcoming anniversary. She asked me how I kept my head as we quickly descended into the Hudson River. I told her that I learned a long time ago from Bill that castles are built in the air before they are built on the ground.

As I watched “ Ted Lasso,” the season and episode ended with Ted picking up the ripped-up board he put up over the door on the first day he arrived, ‘Believe.’ One of his assistants ripped it up as he believed his contribution was not valued. He didn’t believe that achieving big things in life takes a team that can see the castles in the air first.

One of the reasons last Friday was so special was not only was it the 13th anniversary of something that should have never ended the way it did but witnessing a friend, my wingman, who began at the Naval Academy when women were first being accepted believing that she belonged—then having a 26-year career in some of the most challenging situations leading and believing that her mission was proper and serving those who could not help themselves.

I speak a lot about how Coach Patty believed in me as we began our journey last April to go back into the Hudson River and gain redemption and leave on my terms. Coach Patty trusted Suzanne, and Suzanne believed I could leave the Hudson River on my terms. As we swam the final two legs, we were resolved never to “give up the ship.” She and I saw the castles in the sky before we jumped 13 feet off the bridge to begin the mission.

On the plane on January 15, 2009, belief showed up in many different ways. You realize that the only thing you can control is your mindset. So belief comes from your thought process. And that thought process came from years of references of when times get tough, if you believe, persevere, and don’t quit, more often than not, your castle in the sky will be built on the ground.

As I was exiting the plane on Friday night, I stopped to give Monica a copy of my book “Moments Matter” as a way to say thank you for the outstanding service and remembering the triumph of the Miracle on the Hudson. When she thanked me, she looked into my eyes and thanked me for what I had done that day. I told her it wasn’t me; it was the crew, passengers, first responders, but most importantly, my Creator wanted to show the world that if you believe, anything is possible.

Thank you, Suzanne, for your 30 years of service to the US Navy and the United States of America. You are a role model for every young lady that you can accomplish anything you want in life if you believe in yourself.