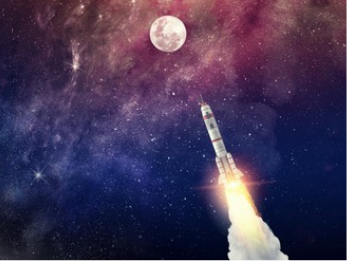 It was audacious and I believe the first literal “moonshot.”

During my time with my mentor, Bill, we often spoke about leadership and how certain Presidents exuded leadership. When I shared with Bill the time I had the honor to meet Senator and Astronaut John Glenn when I was in high school, we talked about this speech. I asked him when he heard what the President said and whether he really thought the United States would get to the Moon.

He told me he never doubted because one thing about great leaders is that they can think bigger than most people and see their goals as “moonshots.” I asked him what a “moonshot” was, and he told me that it is a significant goal to solve a big problem for the greater good. That was the first time I started to think about my major goals as “moonshots.”

I have made “moonshots” every year for the past thirty-two years. Some years I did not achieve the outcome; some years, I did. But it wasn’t until I was on Tony’s security team, sitting on stage left at his Life Mastery program in Maui when I finally “got” the importance of making “moonshots” and the mindset it takes to get them. One thing Tony said that day was just make that big goal, and if you have certainty and perseverance, the strategy will come to you. For many years after this, I made these big “moonshot” goals, but many times I failed. But it was shortly after my experience on the Miracle on the Hudson when I had a chance to speak with Tony I finally understood why I wasn’t achieving the “moonshots” I made most of the time.

In 2016, as I was writing my book “Moments Matter” with Cindy, I found those handwritten notes Bill gave me. The thing that hung over me when I saw them is I made a promise, and I had not fulfilled it. It was then when I made the “moonshot” to fulfill that promise and teach and share what I learned and employed from Bill to 1,000,000 people in ten years. I went back to that conversation I had with Tony in 2009 and put the strategy together.

I started employing that strategy to fulfill not only that “moonshot” I made to Bill but also the  “moonshot” I made for 2021, to go back into the Hudson River to swim from New Jersey to New York City with the Navy Seals, raising money for homeless vets. I had not swum for over thirty years, and it was reinforced to me just about every day from April 20 to August 7; the swim was not only challenging but dangerous. I did not doubt that I would do it, but I had to execute the strategy flawlessly to get it done.

Every day, someone asks me, “how did you do it” when the swim comes up. I share what I initially learned from the stories Bill shared with me on how he built his “mini-empire” starting in 1929 and my time with Tony. It’s simple but not easy. What I have noticed is when major obstacles show up, the people who achieve their “moonshots,” whether if they are an entrepreneur building a business, or their goal of making the Olympics or building a spacecraft that will go to the Moon is what President Kennedy put out in 1962, he made it a MUST for the United States to go to the Moon and back safely.

The way to get whatever “moonshot” you make is by organizing and measuring the best of the energies and skills you have because that ONE goal is one that you are willing to accept and you are unwilling to postpone.

That was the premise of the strategy I used to achieve my moonshot of going back into the Hudson River, not only to swim from New Jersey to New York City and swim with the elite of the elite but leave the River on my terms this time. And one thing my Dad told me repeatedly is you always want to leave any situation on your terms.

My strategy has four steps:

·     You must have clarity of the mission at hand

·     You must take massive action immediately

·     You must have constant and neverending Gratitude

And that is how I was able to learn to swim in some of the most challenging conditions in less than 15 weeks and leave the Hudson River on my terms.

Now, you know my ten-year “moonshot”-  teach 1,000,000 people what I was gifted, and one way I am going to do that is to find ten people who want to learn and experience the same gift Bill gave me, later Tony, and now Don. Take a year of your life, immerse yourself in learning these lessons and strategies, and commit not to let it die with you and pass it on to someone else. Experience your own “moonshot” and live a life of happiness and fulfillment.

This week I found out that one of my close friends and partners made his own “moonshot.”

Darrell Amy is taking this strategy to prepare to climb to base camp at Mt Everest in six months. Darrell, stay the course and you have got this! You have a team with you to make sure you hit your moonshot and we will celebrate with you!

If you are someone who is in your “halftime” of your life, where you are making a living but NOT creating your own flight plan for your life and would like to learn more about these lessons and strategies, please email me at dave@davesandersonspeaks, and my assistant will set up a time for us to talk!