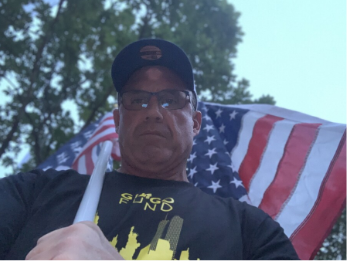 On a recent podcast interview, I was asked why I decided to take up my wingman’s, Suzanne, offer to go back into the Hudson River and swim with her for the Navy Seal Swim last August. I started to give the answer I have given in the past, to get redemption from the day US Airways 1549 crashed into the Hudson River on January 15, 2009. But as I was giving that answer, I veered off into a different lane and started sharing times in my past when I had other significant opportunities and what drove me to not only do them but win, and it is my biggest strength.

In 1994, I was coming off a tremendous sales year where I was not only made the President’s Club; I was one of the top ten salespeople out of 2000. It was a spectacular achievement, and after I returned from President’s Club, I was excited to “repeat.” After I got back, we had a kickoff function at Callaway Gardens, Georgia for the upcoming sales year. My sales director was promoted to a VP position in Southern California, so a new director came in from outside the company. His first event with the sales team was this, and annual sales bonuses were being handed out. My bonus was $64,000, by far the largest check I had ever received to that point. When he handed me the check, he looked at me and told me that I would never make that much money again at the company.

At first, I was confused. I thought sales management wanted their salespeople to excel as if they made more money; sales management made more money. When I got back to Charlotte, I met with my mentor, Bill, and he gave me some perspective on the situation. I started to position myself for other opportunities outside the company should the situation arise. The situation arose, and I left the company to start over. But that one moment was a tremendous learning experience and a defining moment as it gave me my biggest strength.

I had a chip on my shoulder, and it motivated me never to let anyone tell me what I could or could not make, and I would always leave on my terms.

As I shared this story on the podcast, I reminded the podcast host of what happened to Michael Jordan as a sophomore in high school.

After reading the varsity and JV lists, Michael Jordan went home and cried in his room. It wasn’t just that his name was missing from the varsity roster. Over the next three decades, Michael Jordan would become a world-class collector of emotional wounds, a champion grudge-holder, and a magician who converted real and imagined insults into the rocket fuel that made him fly. He always played with a chip on his shoulder.

That day at Callaway Gardens and my subsequent talk with my mentor fueled me never to let anyone tell me I couldn’t do something or not leave on my terms.

The day I went to the pool in Charlotte to meet and swim for my Navy Seal friend the first time, he told me, after I barely made a 25-yard swim, “I won’t take you out of the swim but you will on your own,” that fueled me to get clarity of my mission and swim the 3.1 miles from New Jersey to New York City with my wingman and this time leave the Hudson River on my terms, which would be my redemption.

If you are facing a challenge in your personal life or business and not making progress, you need to withdraw for a few minutes and go back through your life to find a time when you faced a challenge. Remember when someone told you couldn’t do it or don’t worry about it and get a chip on your shoulder. Turn that experience into your chip on your shoulder, which will drive you to find the who for your how to take massive action with focused execution for the current challenge, and you will turn the turmoil from that challenge into your massive triumph!

If you are someone who is in your “halftime” of your life, where you are making a living but NOT creating your own flight plan for your life and would like to learn more about these lessons and strategies I learned and implemented over the past forty years, please email me at dave@davesandersonspeaks. My assistant will set up a time for us to talk!