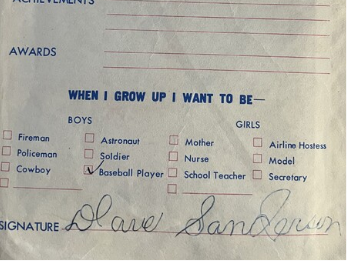 When I began in sales, one of the first things my new manager told me I needed to do was learn  “ the pitch.” I studied every night and presented the pitch to my wife repeatedly until it came naturally. One day over lunch with Bill, we discussed my new occupation, and I shared what I was learning with him. After we spoke, he was the one who encouraged me to sign up and go to my first personal sales training seminar as he told me that what I was learning was not learning how to professionally sell but product training.

I found a seminar called “ Boot Camp” with Tom Hopkins. I invested $495 plus travel to Reno, NV, to attend. My new wife thought I was crazy, but I was committed. That event changed my life in more than just learning how to professionally sell.

One of the first things I learned from Mr. Hopkins is a professional never “ pitches” anything; they only present or show. So for the next 34 years, I never used the word “pitch” in any sales event, business meeting, or interaction.

Four years ago, as I was driving from Orlando to Miami to speak at an event, I was on a call with my friend and marketing advisor, Brad. He called me as he had just watched my TEDx talk, “Bouncing Back- Post Traumatic Growth Syndrome.” He shared with me a distinction that no one had ever told me. He said, “most people probably think your defining moment was the Miracle on the Hudson, but after watching your TEDx talk, I realized that wasn’t the moment. It was a moment shortly after that day.” He added, “that was the point in time that changed everything for you, your PITTChE”.

That was a fantastic distinction as I had purposely veered away from that word for over 34 years. Still, it made sense to me as I realized that everyone has a defining moment in their life, and once they understand that, you will find what you are most passionate about and uniquely gifted for, your PITTChE, the Point in Time That Changes Everything for you.

When I was growing up, I had this little book where my mom collected all my important stuff, awards, mentions in the paper, report cards, the things of growing up. Every year, I wrote in that book what I wanted to be when I grew up. Back in second grade wrote I wanted to be a baseball player. I loved baseball. It was my life. Over the years, my idea of what I wanted to be when I grew up changed. As the moments start to accumulate, our goals and ambitions change the older we get. But one thing that hasn’t changed for me is my love of the game.

I may not have become a major league baseball player, but it’s still part of my life. If you talk with my friends, they’ll tell you I often tell stories and make points using sports analogies. So, as I have had the opportunity to travel the world speaking, working with people looking for their MOMENT, their TIME, I started thinking about those times in baseball terms. If you know anything about baseball, you know it all starts with the pitcher making a pitch.  Imagine you’re a baseball player, standing at the plate, waiting for the pitcher to make that pitch. The future of the game is in your hands. Anything can happen, just like anything can happen in life.

The first pitch comes along – outside—ball 1. You didn’t want that one anyway. Often the top players TAKE THE FIRST pitch and find success, even with an outside ball. But not you, not on this one. Maybe it’s a job you weren’t interested in, perhaps someone who wanted to date you, but you didn’t share the same feelings. Pass.

Second pitch – caught a corner—strike 1. You weren’t ready, but in life, bad things happen, you got a strike. But remember, the GREAT HITTERS don’t walk away. It’s only one strike. They know there’s more opportunity out there. You rub a little dirt in your hands and get ready for the next one.

The fourth pitch and this one looks good. You are ready, and you take a big swing – and WHIFF—strike 2. The longer you live, you learn; in order to be successful, you have to take chances. Sometimes you fail, sometimes you succeed, but you can all learn from your experiences all the time. The pitch looked good, but it went past you. Accept, adjust, and advance in preparation for the next chance.

The fifth pitch comes, and this one looks good, too. You swing and connect. The ball sails into the sky, going, going, gone… foul. You have learned in life to accept, adjust, and advance. Even when things look like they’re going well, sometimes you hit roadblocks. As long as you are in the batter’s box, as long as you are conscious, you have confidence another pitch is coming your way, another shot at success.

The count’s at 2 and 2, two balls, two strikes. You’re still in the game. Here’s the wind-up and another pitch. This time, you are ready. You swing, and the ball explodes off the bat. It’s going, going, going, gone—a home run. You brought in the winning run! The crowd goes nuts; your team is jumping up and down; they’re waiting for you at the plate to slap you with high fives.

Before that last pitch, you were just one of the team. Then the pitch you really wanted and was yours to hit came. It was your Moment, your Point In Time That Changed Everything for you. It was your PITTChE, and you took it.

As we approach the 13th anniversary of my experience in the Hudson River, I started to think about what really happened that day. I realized there are strategies that great players and great LEADERS have to take advantage of their POINT IN TIME THAT CHANGES EVERYTHING!

Most people think that my PITTChE was when I survived the plane crash. But it was actually a little later than that. It wasn’t when Clint Eastwood made the movie “Sully.” It wasn’t when I was on the plane praying to God as we silently sailed towards the river. My PITTChE happened a few days after the crash, on January 25, 2009. I realized that all the moments in your matter and make up who you are, so you are ready to act in that DEFINING MOMENT, that POINT IN TIME THAT CHANGES EVERYTHING, and all of us have those moments.

Baseball is a game, but life isn’t. Things will happen that you can’t control, such as COVID-19, social unrest, elections, plane crashes. It’s how you respond in those moments that define you.

The critical thing to remember is if you don’t take a swing, you’ll never hit the ball out of the park. I knew, at that moment a few days after the plane crash, what my PITTChE was – to share my story, to use it to help others achieve their most important goals, to help others be the best person and best leader they could be. My mission is simple — help those going through their own turmoil from the past year find a pathway to victory and triumph.

You never know when your PITTChE is coming. You won’t always be standing at the plate. I sure didn’t know what was coming as I boarded the plane that day, that within 30 minutes, I’d be going from settling in for my flight to swimming in 36-degree water for my life.  Bill and Tony had helped me find my own PITTChE over the years. But it was in those moments on the plane, and the time in those few days after, when I discovered my PITTChE.